In Europe and Asia, fungus-fanciers have for millennia patiently trained bears, boars, dogs, racoons and especially pigs to root out that prince of foods, the truffle. Similar to a mushroom, but growing several inches underground, these delicacies can fetch hundreds of dollars per ounce when at their peak. 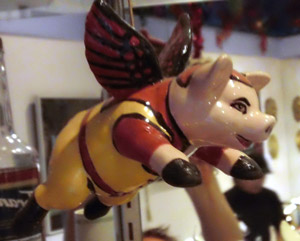 Equally precious to those who know are chocolate truffles –  the highest form of the chocolatier’s art. However, in contrast to the terrestrial fungoid truffle, the chocolate truffle is of celestial origins, as any connoisseur will tell you. Thus, a pig wishing to track these truffles would need to evolve wings, whereby to seek them out in higher spheres.

This is, in fact, what has happened at The Truffle Shop in Nevada City, California purveyor to popes and potentates, where chef Willem DeGroot’s porcine pet, Willemina, can be seen evenings spiraling around in the upper regions of his sumptuously appointed truffle kitchens, a-sniff for the precious dark pearls, known as the DeGroot Chocolate Truffle, some of the finest gourmet chocolate truffles in this earthly sphere.

As Willemina soars through your kitchen or dining room, or around your Christmas Tree, flirting with your loved one on Valentine’s Day, she will inspire you to seek out the highest possible aesthetic, as she and Chef DeGroot do, at whatever the evolutionary consequences.